Web users, please save web designers by upgrading to the latest IE7 or Firefox

When I was a normal web surfer, I never thought it would be a critical issue for web page to display correctly on every browser. But recently it comes to me as a head-ache matter when designing the layout of mahshelf.com. Luckily there is a javascript file that makes IE5-6 behave like a standard compliant browser. Although the situation about web design is temporarily stable, I am still looking a talented web designer in the future.

PS: I made a quick look at browser statistics table and in this month, IE5-6 browser users are continuously decreasing.

MahShelf.com has been slightly optimized

First, I am very grateful to those who bear the beta stage with me. I know there are such annoying bugs and inconvenience while using MahShelf.com but please do not worry, I am still eating my own dog food every day. Yes, I have made it my habit of reading funny comics and jokes there and it is real fun. Any inconvenience in usability you currently face is probably the one I hate the most while reading there. I try to improve the site considering myself as normal as any one else.

There will be many differences in the next release of MahShelf.com. The speed of uploading and reading has been improved a lot, the page is load faster thanks to the new server and new caching method. And there should be slight changes in UI such as users are allowed to post links in the comment, a better upload button is now located on the left, the page displays correctly in most browser ...

Although I think the site has achieved the stable stage in functionality, there are much more things to do to make it eye-candy to the user and yet fully accessible. :D

After installing a LAMP server on an old P3 800MHz machine - yes it is so old that it was picked up from my apartment storage room, I typed "php -v" and it says in the first line :

It seems to be the modules json is loaded twice, I looked into the php.ini files and there it is:

Simply commenting out that line solves the problem and yet leaves me the doubt where is it first loaded besides the time php.ini calls it. I guess there is something with the php5-json package I installed, it may already be included in php5 library and automatically loaded. That is not bad at all since the Debian team will maintain that package and give me the latest one. :D

"PHP Warning: Module *** already loaded" seems to be a very common warning for freshly installed PHP. If you happen to see the example below here then this post may help you

In this case, the reason may be that the modules json is loaded twice, look into the php.ini files and find this line and comment it out with a comma

Don't forget to look into both /etc/php5/cli and /etc/php5/apache2 if the warning appears both in your command line and web server.

There is a chance that you have installed the php5-json package in your Linux system and it also enable the extension somewhere in a config file therefore the duplication occurs. I would recommend to use the package from your distro repositories to make sure that everything is up to date.

How did I tame my IE6 stand alone

Today morning, I wrote an entry about how difficult it is to have Firefox, IE7, IE6 and Safari running on a single machine. Now it is not really a matter anymore, thanks to someone has made a portable IE6, I can have an old friend back. There is also a Windows version of Safari 3, but it is still at beta stage and for some unknown reasons it crashed on my XP. (I will figure it out later.)

There are couples of tweaks need to be done before having IE6 operate properly. You can follow it here to enable cookies, append a "IE 6" title to the browser and fix the conditional comments feature in CSS. Life is just half beautiful again.

Later on, I found a Javascript bug on my site and, well, it is time to google for a good IE script debugger, I found this and this, and decided to use IE Developer Toolbar and Debug Bar since it looks neat and user-friendly. The functionality is somehow similar to the commendable Firebug of Firefox. If there is any problem, Script Debugger for Windows is my first candidate in the waiting list.

For those who keep up with what I am currently doing, you may notice that our website is at pre-beta testing stage and I am very excited every time I think about it. But now there is one difficulty that I admit that I do not know how to solve, hope you guys can help.

I am testing HTML, CSS and Javascript on Firefox and IE7, the site seems to run well on those 2 standard browser but since I received several issues that it is broken on IE6, Safari and other older browser, the headache has started. For CSS issues, although it was the first pain for my head and I am not a CSS master, it was solved quickly by detecting and adding separate CSS file to separate browser.

Now comes the interesting part, playing with Javascript is fun but it is only the joy when you have the so-called "toys" in your hand. Without those tools Firebug, WebdeveloperToolbar, I feel confused. And that is the situation I currently face with IE6 and other unfamiliar browsers. It is even worse when my working environment only has Firefox and IE7. Fooling around between my laptop and PC is a waste of time. I really want to find a solution having everything on a single machine, I also hope in the internet, someone has made a Javascript debugger on IE6 or Safari. Then life should be much easier.

Well, meanwhile, I am downloading Safari on Windows and IE6 standalone to try out; fixing some PHP bugs with Eclipse and eh oh it's Sunday, may be going to the pool will refresh my mind a little bit. 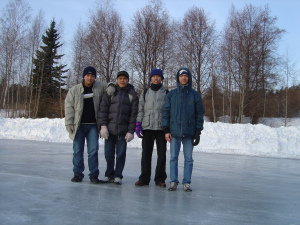 These are my 3 skull-pals . Haha ,  give my thankfulness to them . I have had a good time with them in such a frozen place .
PS : Who i am, the left-most guy.
Older Newer