Since MahShelf was launched, we have made 14 major releases (and tons of bug fixes). This time we were under heavy development migrating MahShelf code base from symfony 1.0 to the latest symfony 1.2. There are many reasons we wanted to upgrade. One big reason is that symfony 1.2 is powerful, lightning fast and flexible for adding more features in the future. In addition, we have improved the search engine performance which means MahShelf website will load much faster in your browser even when you make a complex search.

Each of us at MahShelf is a comic addict and we do think a lot about our comics readers and artists. In this release we want to bring something refreshing and fascinating to our users to express more about themselves: theme customization in the profile page. Interesting enough? Here is an example of my own profile before and after I have made some changes. 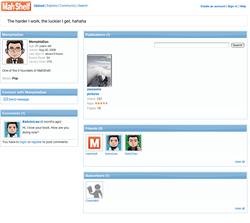 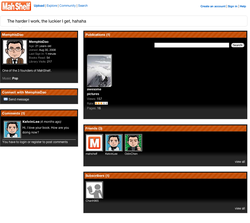 However, I think orange header suits best with bright background and finally I have a personal profile page which is up to my satisfaction within a few seconds. 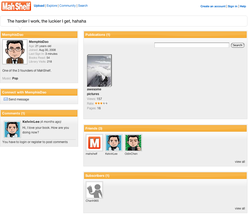 The reason we made this feature happened is that we just want any artist who is already creative with their comics, to be more creative personalizing their own library page. We believe this feature will improve the communication between artists and their fans as well as building up the brand name of the associated comics.

PS: We’ve been gradually switching to the new version and hopefully you haven’t noticed too many problems. If you notice any problems please let me know directly at memphis.dao[at]mahshelf.com.

The web comic world consists of many aspects, and gaming seems to be the most popular topic. We have collected here the best 10 web comics related to games for you to start reading. Enjoy! And if you know some other comics you thinks are best, comment below.

A web comic focused on video games and gaming culture, written by Jerry Holkins and illustrated by Mike Krahulik. The leader of web comics in general. Updated with a new comic strip each Monday, Wednesday, and Friday. 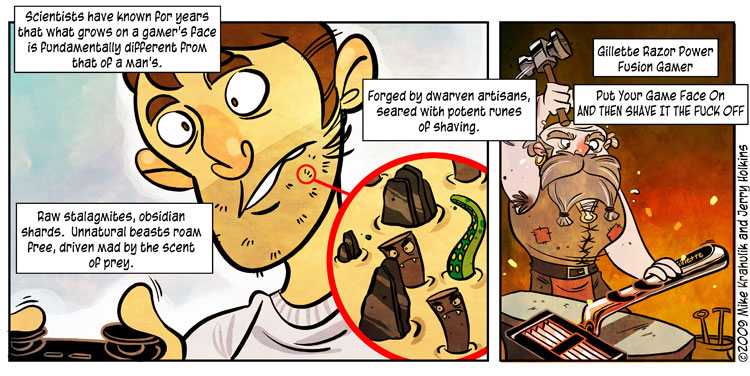 A gaming-related web comic and animated series written by Tim Buckley. The name of the comic refers to the Windows command Control-Alt-Delete. Updated every Monday, Wednesday and Friday. The comic's focus has gradually shifted away from single strip gags towards longer story arcs and greater continuity. 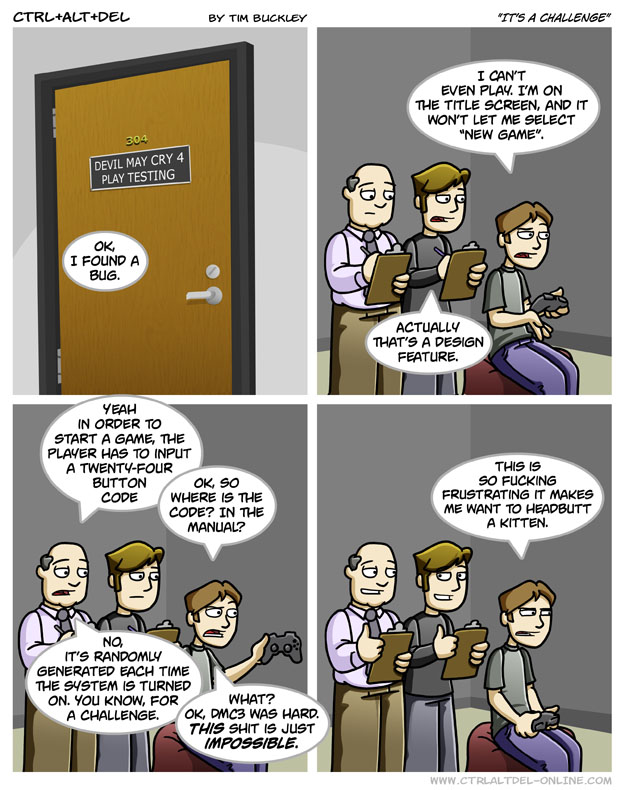 Video Game Cats is a web comic written and drawn by Canadian cartoonist Scott Ramsoomair. Featuring the adventures of a pair of anthropomorphic cats, who often play the roles of characters in popular video games that are parodied in the strip. 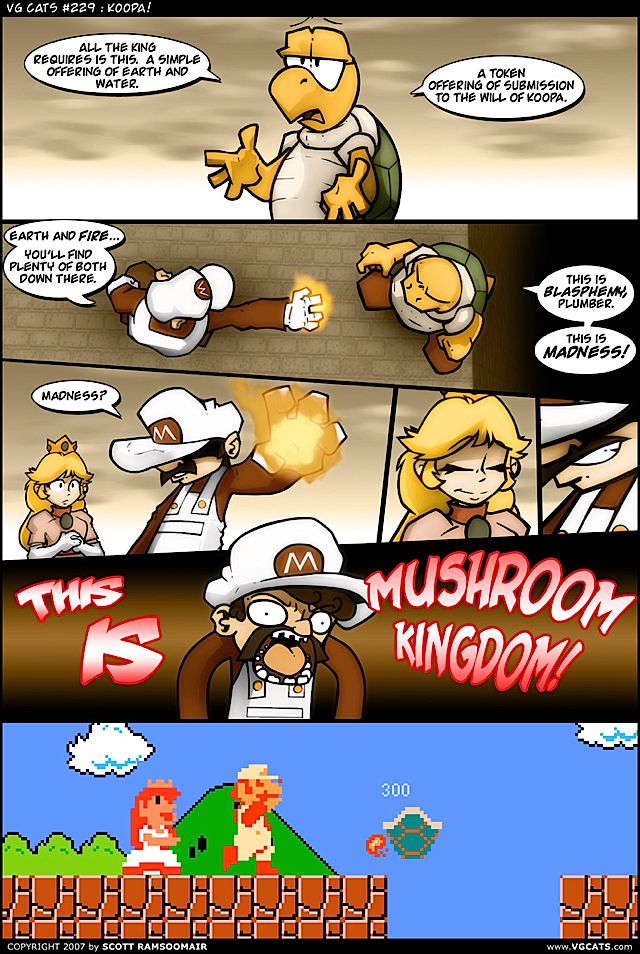 A fantasy-themed, World of Warcraft influenced web comic written by Ryan Sohmer and drawn by Lar DeSouza. The Comic follows the quest of Cale'Anon (an elven hunter) and Richard (an undead warlock), as well as their companions.

A World of Warcraft based web comic written by Uros Jojic and illustrated by Borislav Grabovic. The artwork and story line really catches attention from WoW fans as well as comic readers in general. 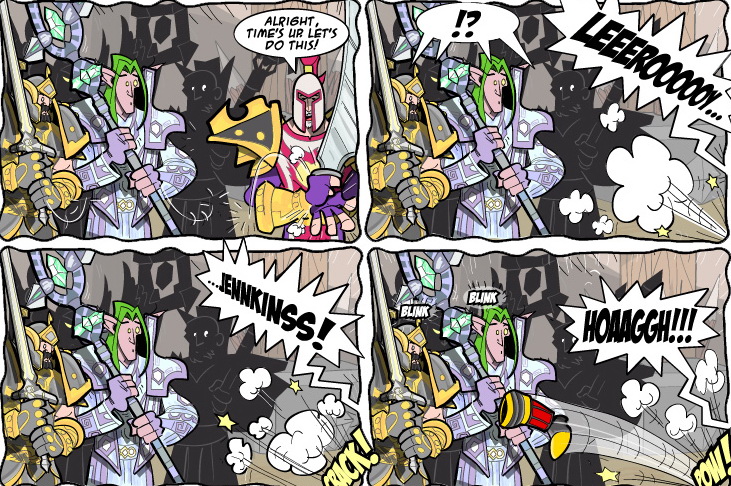 A gaming comic and as such most of the comics take place in the universe of the games discussed.

Also known as Player vs Player, is the adventures of a fictional video game magazine company and its employees. 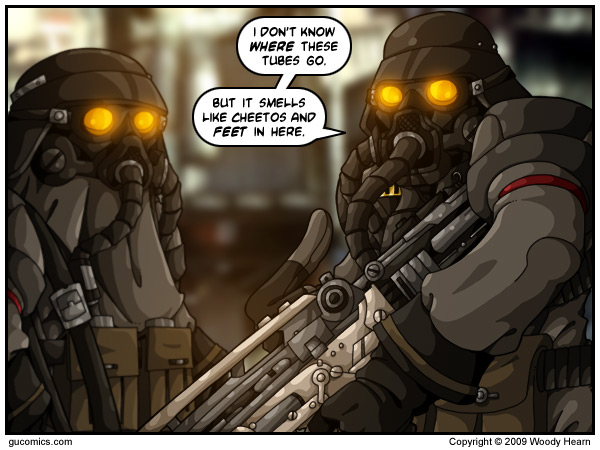 Ding! represents the WoW adventures of the gang at PVP. Story by Scott Kurtz.

Experience Points is about two characters, Barney and Victor, who represent the aging gamers ... the guys that grew up on Atari and NES and just can't get it out of their blood. By Scott Johnson.

Backward Compatible is a behind-the-scenes glimpse of life at Crispy Gamer by Aaron Williams.

How many manga characters to kill top 10 comic superheroes? 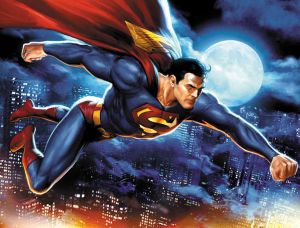 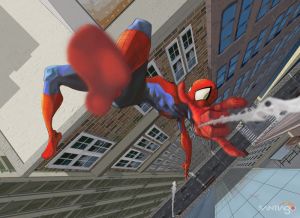 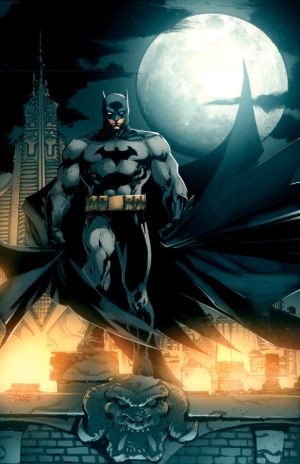 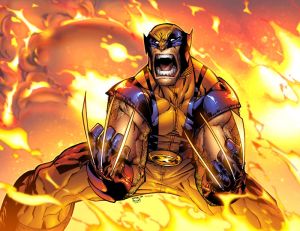 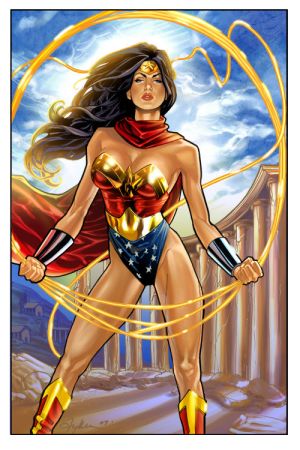 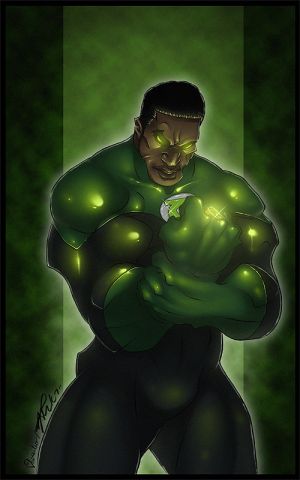 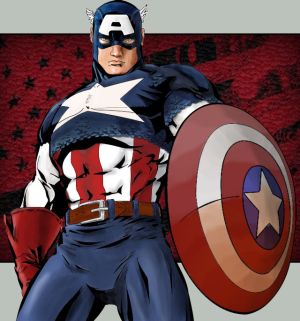 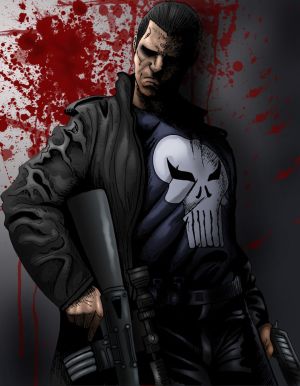 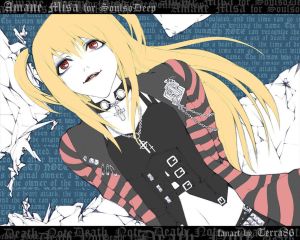 Given that she has a pen, the Death Note and somewhere safe to watch the superheroes and write all of their names on the note.

I am recently very fond of the term "code in a tweet" which means that a very useful piece of source code can even fit a Twitter post.  Below here is the shortest javascript that can detect IE browser by Andrea (yeah, IE sucks and we have to detect it to eliminate its problems)

Moreover, Gareth Heyes has come up with other browser detections and gather them together

Usage: The variable assignment is the abbreviation of the browser e.g. FF, IE, Op, Saf, Chr which return true or false.

Artworks used in some pages

Along with our previous upgrade, some interesting artworks were used in maintenance page, 404 page and 500 page of MahShelf. If you are a frequent user, you might have noticed one or two. Today we reveal the whole set to everyone. Enjoy! 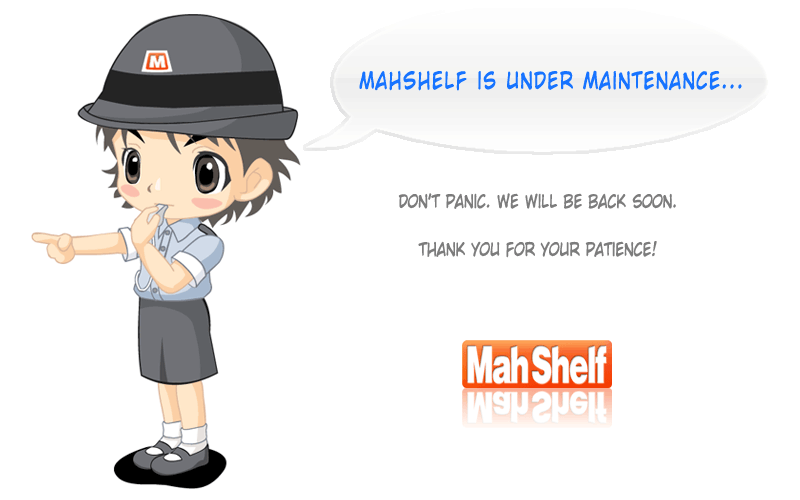 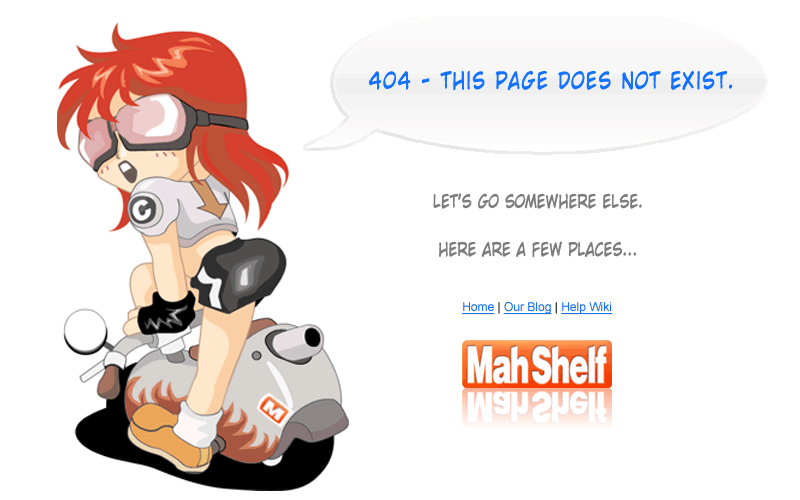 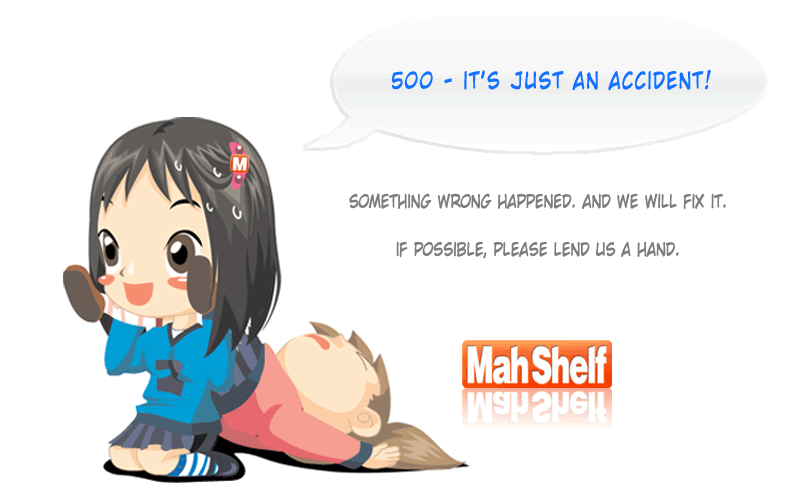 Characters used in the above artworks came from Dezignus.com as copyright-free designs. You can get the whole collection of  20 characters here.

Over the last 2 months we've been working on a redesign of our account/profile interface. The previous template was quite plain. We wanted to provide everyone with a glossier feeling, but still keep the simplicity of the whole system. And this upgrade is, so far, quite satisfactory for us. 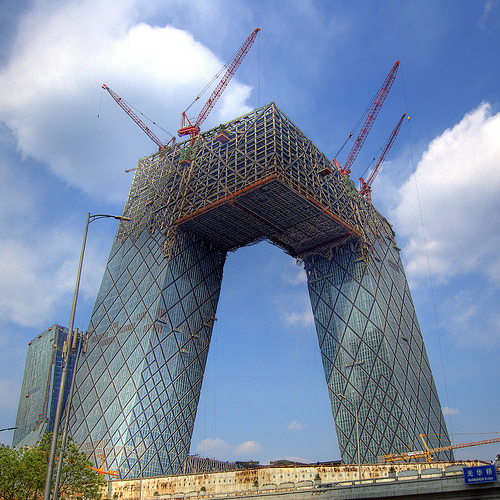 Many changes have been made, not only in graphic designs, but also in technical structures (a newer version of javascript library, brand new design in core system and database...). With this new architectural approach, site performance and stability of MahShelf have been improved a lot. In the future, it will be easier and quicker to add new features such as theme changing, profile customization...etc.

[Updated] Sorry to be arrogant and simple minded but I always think jQuery rocks and try to inspire as many people as possible to use or move to jQuery because of  one simple reason: the more users and developers use jQuery the better it is and the more plugins will be created.

[Updated] jQuery 1.3 is out and it is super fast ! Read more 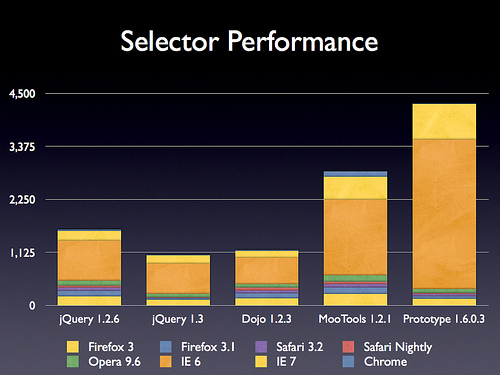 I have once used Mootools for one of my projects and it turned out to be running well. The performance was fast and I had no problem implementing its animation effects and plugins. However, I found several complaints about mootools on the Internet that will affect my choice of JS library in the future.

It has been quite long since the last time we updated our Blog. We have been over-occupied with all the technical as well as business development. For a small team, it was amazing that we could withstand such stress of being a start-up (especially in Finland, where winter lasts for 6 months and the weather discourages people to think positively). Regardless, there have been so many things happening around. For instance: 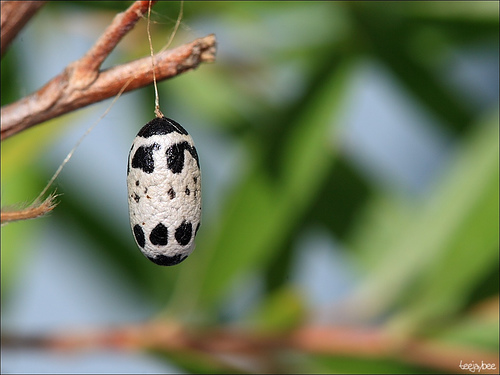 For the present, as glooming as the economy climate is right now, we are still keeping up the high spirit here at Mahshelf. We are offering trainee positions at Mahshelf for entreprenerial people/ students, with or without working experience in IT and Media. So if you want to try out your strengths with challenging tasks at Mahshelf LTD, take a look at our Jobs page or send an email straight to jobs(at)mahshelf.com.

And last but not least, we will be releasing more new features from now on. The team has been building up something huge, and we will reveal that to everyone soon.

If you gonna set up a web startup ...

Wanna be the next Google? Do I hear a "Yes" elsewhere ? I have loads of thoughts on this since I love doing web startup. So let's do this checklist to realize...

1. Do you know absolutely everything about your business? Do you eat your own dog food? Those "Well, I will use my product later when it is fully developed/established" or "Ehr, I will use my service later, got things to do now..." will definitely fail, more here

2. Are you ambitious/motivated enough? Doing startup is not doing your everday work, if you work only 8 hours a day and spend the rest of the day relaxing then you better quit it. Most IT staff work 8 hours per day under excellent management and what will make your company the next Google since there is no difference between you and other normal IT staff.

3. Do you have a successful team? From Taneli

Success Teams are often full of leaders. There isn't just one central person responsible of leadership: everybody leads, and they lead to every possible direction: their own teams, colleagues, their bosses, partners etc.

And in the end, let's discuss a quote from Kristoffer Lawson:

New startups are fantastic because they still think it's easy so they'll go for it and only later realise the deep hole they got themselves into :-)

Now you decide: do you give up or go forwards with the lessons learnt. If you decide to continue, chances are you'll have now learnt stuff the hard way and will be much better tomorrow. You need to be hammered to eventually become world-beaters!

As we are aiming for a better environment where comic artists and publishers can feel at ease putting comics to MahShelf.com, there are things regarding copyrights we must make clear to everyone:

With great comics come great respectability. So to all comic makers out there, we give you our best regards!